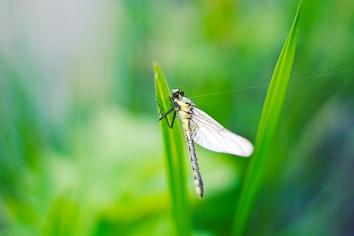 Look around the pond and prairie for dragonflies flitting in the air. Throughout spring and summer, peer into the pond to search for large dragonfly nymphs scuttling through the water or spot nymph casings clinging to plants along the shore, where they make the transition from wingless juveniles to flying adults.

Dragonflies are one of the most unique and friendly insect families in North America. While they mostly live in tropical rainforests, many species live in wetlands and forests of cooler climates such as Wisconsin. These ancient insects are already large compared to other insects; however, millions of years ago they grew to over 30 inches in length!

During their adult lives, dragonflies snack on other winged insects such as mosquitoes, moths or butterflies. Most of their lives, however, are spent in the water as nymphs, where they eat anything smaller than they are, such as fish, larvae, or worms. Because they have lives split between water and land, dragonflies are great creatures to study for the effects of climate change.

As temperatures warm, dragonflies, like many other species, are expected to spread into regions that used to be too cold for them. Unfortunately for dragonflies, some of the ways we are trying to slow climate change are harmful to these insects. Hydropower is a promising renewable energy source, but it destroys their wetland habitats. Solar panels, which turn the sun’s energy into clean electricity, sometimes attract dragonflies because they are shiny like water — they mistakenly lay eggs on these hot panels, where the offspring cannot survive. How important is it to factor impacts on species like dragonflies into new technologies that are better for the planet overall?

Spot something cool? Snap and upload a photo and caption on our Siftr page!  (www.siftr.org/alnc)

The mission of the Aldo Leopold Nature Center is to engage and educate current and future generations, empowering them to respect, protect, and enjoy the natural world. Established in 1994, the Aldo Leopold Nature Center (ALNC) is an independent, non-profit organization. Through hands-on interactive programs and special exhibits, ALNC is leading the way to engage, educate and empower the next generation of stewards of the land for a healthy, happy, and sustainable future. View all posts by aldoleopoldnaturecenter

One thought on “Dragonfly”

Aldo Leopold Nature Center is honored to present Digital Docent: Climate Change Impacts walking tour, a project of Ethan Heyrman, an undergraduate fellow at the University of Wisconsin-Madison. Ethan partnered with the Aldo Leopold Nature Center and Jack Williams, Director of the Nelson Institute for Climatic Research to create this self-guided walking tour through ALNC's grounds, bridging the gap between global climate science and our local community. Happy exploring!

As always, trails are open from dawn until dusk all year-round. Facilities and exhibit areas are open Monday through Friday: 9am to 4pm and Saturday & Sunday: 10am to 2pm.
Loading Comments...
Comment
×
%d bloggers like this: